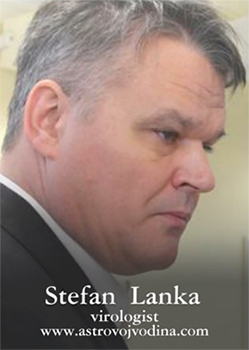 The media slandered Stefan Lanka in the lower courts, but in 2017 the German Supreme Court ruled in his favor.

The mainstream media REFUSES to report on this.

Journalist : Are you a virologist?

Journalist : Tell me what led you to the conclusion that there is no measles virus?

Stefan Lanka: Two things. I understood how biology works, how life is formed, what mechanisms create us, what causes diseases, how to regain health. There is absolutely no room for something that is a pathogenic virus. That was the answer to the question. And how I came to this conclusion and why I am sure of my discovery, that is the second part of the answer. I am a virologist and I was the first to discover the ocean mega virus that never hurt anyone and today we know that life comes precisely from these structures. And of course, a competent virus detector, I began to check the claims of modern medicine, whether these pathogenic viruses exist at all, and came to the conclusion that their claim was not true.

Stefan Lanka: He wants me to achieve the reformation in medicine that should have happened a long time ago. Everyone knows that the SARS epidemic was suspicious, bird flu, swine flu, it is known that something was wrong there, and I am simply the first person who has the courage to go public with this. I have a lot of people who support me, including the Nobel Prize winner, but someone has to start talking about this. A reformation of medicine is needed. Medicines are becoming more expensive, and people are getting sicker. We've talked about this before.

Journalist : If there is no measles virus, how do you explain the symptoms listed as references to measles?

Stefan Lanka: In the same way as previously explained, before the idea of ​​the measles virus began. The same drop was explained by Chinese traditional medicine or Indian Ayuveda, that there is no infection with materials, but the skin is poisoned on the outside with crude oil products, toxins that are in them, as well as with poisoning of our skin inside. That’s why people go to saunas, to make all those things grow. If the kidneys cannot excrete these toxins, if the unir is white, and substances such as urea, uric acid and creatine remain inside the body, all these things will come out through your skin. The skin nourishes us, it cleanses us. And when that mechanism is compromised, we will have inflammation of the skin and they usually call it mobile phones. There is a third thing that I checked and that I concluded was scientifically correct, and that is psychosomatic effects can affect when someone is forcibly separated from something or someone. In that case, our skin literally becomes thin, which a person can feel, and when the trauma process is completed, the skin will renew itself. This process is exactly what we call measles.

Journalist : How then do you explain the danger of infection?

Stefan Lanka: I think that's clear. In terms of "infection", if I drink the same water or eat the same food with toxins, if I apply the same toxins to the skin, those toxins will start to come out of my body, I will have the same symptoms as others or soon after them.

Journalist : We have a young doctor from Hamburg who claims to have proved the existence of measles and asks you to pay him 100,000 euros in rewards. Why don't you admit his proof? What is the problem?

Stefan Lanka: The term "evidence" is defined only in Germany. That is why I opened this competition under German law, because nowhere else in the world is there a defined science, not even a scientific fraud that is part of the usual statutes of the criminal law, and that is the reason why they can say and do whatever they want.

Journalist : But what information did he provide that you don't see as evidence?

Stefan Lanka: He sent me publications that, above all, anyone who speaks English can check because they are published in English. There is no evidence for the existence of a virus, no isolated virus or characterization of the actual elements of the virus. This can be confirmed by any non-professional within a few hours when they read the publications.

Journalist : So, you are not against the designation of measles but against the claim that measles causes a virus?

Journalist : Because it is obvious that the disease is real.

Stefan Lanka: Yes, your question about measles pathology, about design is correct. It is one of the diseases that is precisely defined and exactly medically accurate. It is a maculopapular inflammation. However, viruses are always cited as the exclusive and only example of that, but scientifically speaking, that was not true in the past or today. So far, this has been successfully refuted because in today's models there is no place for war and attacks, all of which came from historically ancient thinking, and that is not the case in reality. Officially, it is a viral disease, but doctors who do not pay attention and other doctors will treat it with antibiotics, which is wrong according to our model of modern medicine and does not make any sense.

Journalist : How do you treat then?

Stefan Lanka: You need to find samples. There is no general answer because people have individual samples. Whether it is external or internal poisoning, the condition of the kidneys, it is always important to check, just like in Chinese medicine, how the kidneys function, since they can increase the small symptoms by 10 times. And what are the psychosomatic effects a person has? All this must be looked at to find a pattern, the perfect therapy and treatment.