"Hail Mary, full of grace. Our Lord is with thee. Blessed art thou among women, and blessed is the fruit of thy womb, Jesus. Holy Mary, Mother of God, pray for us sinners, now and at the hour of our death. Amen." 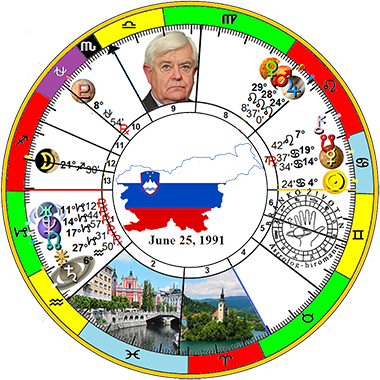 Slovenian Independence was accomplished on 25 June 1991, separating itself from the worst aggressor communistic state - Tito's Yugoslavia. Fortunately, Yugoslavia broke down and communism was broken. Slovenia is the coastal and subalpine state in the south of central Europe. The President is Borut Pahor. The Slovenian president is elected every fifth year. Prime Minister is Miro Cerar. The capital is Ljubljana. Military service was terminated in 2003. It has a professional army. Member of the United Nations, European Union and NATO Alliance. It borders with: Italy, Austria, Croatia and Hungary. Official language: Slovenian, Italian and Hungarian. Hymn: Zdravica. Parliament has two homes: the State Assembly and the State of the World. The highest point of Slovenia is Triglav (2.864 m; symbol of Slovenia). The most popular sports in Slovenia are: football, basketball and handball..

Employment will increase in 2018

The crisis that Slovenia had in economy in 2015 and 2016 will be at a lower level in 2018 to June 2019. Slovenia will have economic growth and fiscal consolidation in 2018 to mid-June 2019 as well as the reduction of public debt. Private consumption will increase considerably. Domestic demand will be important. The reduction in the unemployment rate. Slovenian exports will be enough to grow. The only problem during 2018 to June 2019 will be expensive food and clothing, footwear, technology. What will be quite expensive are real estate and buying new cars.

Workers from Bosnia will be particularly on price and respected because they are the most valuable people and do not disturb the business, with the difference of other nationalities who will come to work in Slovenia. In addition to foreign nationals from Bosnia and Croatia, the Slovenes themselves will be able to work. The largest growth in the number of employees will be in construction and other diverse business activities. The declination of planet Jupiter is at -14.8731° in the constellation of Ophiuchus. and the declination brings a greater number of employees in the period from 2018 to June 2019.

The annual declination of the planet Uranus is at 11.6024° in the constellation of Taurus. Neptune's natal declination is at -21.7078° in Capricorn star sign but the annual declination of Neptune is at -6.2138° in Pisces star sign. Slovenia will continue to be the most delightful for tourism because it possesses a lot of vegatation, cleanliness, culture, caves, bicycling, fountains, various monuments and sculptures, good music along the whole of Slovenia, which will only attract tourists and besides this, people are extremely nice and happy towards strangers.